After a proper dimensional design, tensioning is the main operation and factor that determine a high efficiency of band saw blades during work. Tensioning implies the pressing (rolling, lamination) of the area that corresponds to the peak of the domed sector of the wheel, obtaining a stretching of the blade.

The elongated sector transmits stretching tensions to the toothed area of the blade increasing its rigidity.
Rolling force is maximum in the center and decreases on sides. The tensioning grade is expressed by the size of the gap (lighted slit) between the blade and the ruler.
A blade that has been properly tensioned fits perfectly the wheel, moving on it without shocks and vibrations. During work the teeth area warms up but keeps a proper rigidity. 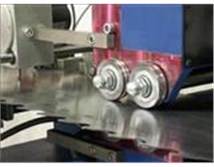 In case of an unsuficiently tensioned blade the following can be observed:

- the blade deviates outward when contacts the wood (slips on the wheel)
- the cutting line is wavy
- the planck thickness is variable on length.

In case of a too tensioned blade the following can be observed:
- the blade deviates inward
- cracks begin to apper in the tooth body.